Prof. Gurbhajan Singh Gill (b. 1953 Basant Kot, Gurdaspur) did his graduation from G.G.N. Khalsa College, Ludhiana and masters in Punjabi from S.C.D. Government College, Ludhiana. He retired as Senior Editor from Punjab Agricultural University, Ludhiana in 2013. He remained Secretary General of Prof. Mohan Singh memorial foundation (Regd.) Ludhiana for a long period and was President of Punjabi Sahit Academy, Ludhiana from 2010 to 2014. Presently he is Chairman of Punjabi Lok-Virasat Academy and associated with numerous Literature, Cultural and Sports oraginsations.

His passion for Punjabi Literature, language and heritage created in him an urge to be part of the movement for promotion of mother tongue, Punjabi. In this ardous task, and as a writer he has voiced his concern for development of Punjabi on state, national and international forums. He is a reputed writer contibuting his poetic renderings and write-ups in various journals and newspapers of the world. He authored about 20 books out of which 'Agan Katha’, “Surkh Samunder', ‘Dharti Naad', ‘Khair Panjan Panian Dee', ‘Mor Pankh”, “Gulnar', ‘Dharti Nada', ‘Sur-tal,' 'Pardarshi', 'Ravi' and ‘Man Pardesi’ are close to the hearts of Scholars, Poets and Writers. He co-authored another book, 'Camere Di Akh Boldi' with Tej Partap Singh Sandhu on civil and social issues of Punjab. 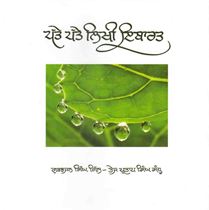