Dr. Pritam Singh Kambo was born in 1939 at village Bhullarai, Tehsil Phagwara District Kapurthala (Punjab). After serving the government for twelve to thirteen years and later as a lecturer in college, he migrated to England in 1970. He worked for a long time in government schools and retired. While in a foreign land, he maintained his relationship with Punjabi language, Punjabi culture and Punjabi literature. He conducted a research into the Punjabi poems which were banned during the British rule and obtained the degree of Ph.D. from Guru Nanak Dev University, Amritsar, Punjab (India). He established the International Punjabi Sahit Sabha, UK, in association with his companions and he functioned from time to time as its President, General Secretary and Secretary, etc. He was honoured with ‘Shiromani Sahitkar Award’ by the Punjab Government for his important contribution to Punjabi literature. He was also awarded a Gold Medal by the Punjabi Sath, Jalandhar (European unit) and many other awards by established literary bodies. Besides being a serious researcher, thinker, critic and analyst, Dr. Kambo is a seasoned story- teller also. Till now he has got published a research book, two books of criticism, three edited books and two collections of short stories – Dhukhda Gohta and Dishavaan. After holding long interviews with Punjabi writers, he has brought out a wonderful book Sirjna te Samvad. Recently he has published a very valuable compilation Prof. Pritam Singh : Jiwan, Shakhsiat ate Rachna which contains very interesting articles by eminent literary luminaries. Three books on criticism are on the anvil with him. He maintains close relationship with Punjabi and Punjabiat. His home environment is fully Punjabi. 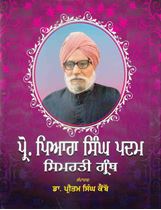