He started his career as a Bank Clerk and became Punjabi teacher (Quetta, Pakistan). Later he became lecturer in Punjabi and retired as principal, Guru Nanak College, Gurdaspur.

He had a deep understanding of human mind and social relations and he stood for the down trodden and deprived section of the society. Since he was acquainted to world literature, he attempted to write short stories which can be compared with the classical short-stories of the world literature. He was also associated with progressive literary movement and it's impact can also be observed in his stories. He also attempted to retell the stories of Sikh Gurus in his own way. 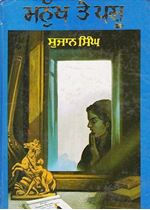